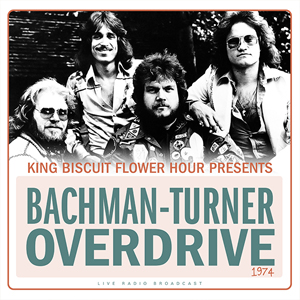 Bachman–Turner Overdrive, often abbreviated as BTO, is a Canadian rock group from Winnipeg, Manitoba, that had a series of hit albums and singles in the 1970s, selling over 7 million albums in that decade alone. Their 1970s catalogue included five Top 40 albums and six US Top 40 singles (eleven in Canada). The band has sold nearly 30 million albums worldwide, and has fans affectionately known as “gearheads“. This live performance was given at the King Biscuit Flower Hour in 1974.

Side A
1. Takin’ Care Of Business
2. Slow Down Boogie
3. Roll On Down The Highway