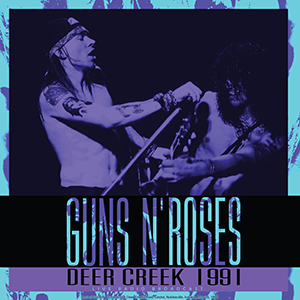 The music of Guns N’ Roses is a fusion of punk rock, blues rock, heavy metal, hard rock and hair metal. Founded in LA in ‘85 the band has been credited with helping re-popularize power ballads in heavy metal music. ‘Appetite for Destruction’is the highest-selling debut album of all time in the US. The album ‘Use Your Illusion I’ debuted at number 1 of the Billboard 200. This is the band in their prime during the ‘Use Your Illusion Tour’ that lasted over two years, playing their biggest hits like ‘November Rain’, ‘Welcome To The Jungle’, Sweet Child O’ Mine and many more. This release is also available in a limited edition red coloured vinyl.

SIDE B:
1.November Rain
2.Sweet Child O’ Mine
3.Paradise City
4.Welcome To The Jungle