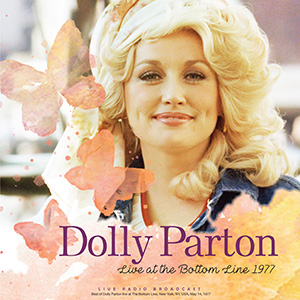 Dolly Parton is one of the most-honored female country performers of all time. This record captures the final night of her New York City debut in 1977. Her show had become the hottest ticket in town, attended by Bruce Springsteen and Mick Jagger. Proving she is still a hit with new generations of music lovers, Dolly’s 2014 performance at Glastonbury Festival drew 180.000 people, the biggest crowd seen for a single performer at the festival, singing along to her hit songs that are also featured on this album: ‘Jolene’, ‘Coat Of Many Colors’ and ‘I Will Always Love You’.

SIDE A:
1. (Your Love Keeps Lifting Me) Higher And Higher
2. All I Can Do
3. Jolene
4. Do I Ever Cross Your Mind
5. My Tennessee Mountain Home
6. Coat Of Many Colors
7. Light Of A Clear Blue Morning