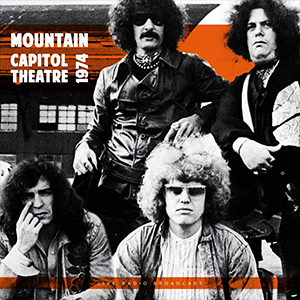 Mountain is an American hard rock band that formed on Long Island, New York in 1969. Originally comprising vocalist and guitarist Leslie West, bassist and vocalist Felix Pappalardi, keyboardist Steve Knight and drummer N. D. Smart, the band broke up in 1972 and has reunited frequently since 1973, remaining active as of November 28, 2009. This album live radio broadcast which was recorded in 1974 at Capitol Theatre in Passaic New Jersey.

Side A
1. You Better Believe It / Crossroader
2. Theme For An Imaginary Western
3. Never In My Life
4. Jingle Bells
5. Roll Over Beethoven | Whole Lotta Shakin’ Goin’ On

Side B
1. Get Out Of My Life Woman
2. Band Intro
3. Mississippi Queen
4. Nantucket Sleighride